On our final day in Rome we’re abandoning our vampire-like tendencies and we’re venturing outside during daylight! There are two activities on our list that can only be experienced during opening hours and we've planned accordingly.

As we’re grabbing our sunnies and lacing up our shoes in preparation for what will surely be a sweltering day, my husband discovers a surprise that absolutely makes his morning (he’s easily amused you see..). His face lights up as he wields his camel-colored loafer in the air, pointing at a tiny pebble wedged into the ridges of the sole. He surprises me with his enthusiasm as he explains the significance of the tiny rock.

Last night, on our lost in Rome adventure, we stumbled upon an opportunity too sweet to resist – a section of the Roman Forum that was only modestly blocked off to visitors. Slipping beneath a metal-link chain and stepping over a low-profile iron gate, I couldn't help but think – if it’s this slight of an obstacle, and there is no ‘Do Not Enter’ sign in sight, this gate is really merely a suggestion, right?

Wilhelm explains that on our mildly-illegal stroll through the ancient religious and cultural center of Rome a pebble settled itself amongst the creases in the sole of his shoe and he had since been hopeful that it might stay lodged there until we returned home. He goes on that he is excited to take home a piece of Roman history, a piece that even Caesar himself may have walked on at the height of the Roman Empire. All this from a tiny rock! Alright babe, that’s cool…just don’t list the pebble on our Customs & Immigration paperwork!!

After a moment or two reminiscing on the previous nights’ Eternal City adventures we start out on our final day. First stop: Torre Argentina…or more accurately: The Cat Sanctuary.

“Et tu, Brute?” The very spot at which (in the year 44 BC) Julius Caesar was stabbed to death by his rivals - today acts as a safe haven for the abandoned cats of Rome! This archaeological gem, known as Torre Argentina, is seemingly sunken below the happenings surrounding it as modern Rome is built about 25 feet above the ancient city. If one doesn't know what to look for, they might look down and see nothing more than another pile of old rocks dug up in the 1920’s and forgotten as the world grew up around them.
As we take a moment to look into the ruins rather than simply at them…the silhouettes of over 250 four-legged creatures begin to take form!

Funded and staffed entirely by volunteers and donations, this little shelter renews my faith in people. As the world buzzes on throughout time, it often appears as though people become callous, forgetting to care for their fellow man or beast – but the “gattare” (or Cat Ladies as we’d call them) who provide these cats with hearty food, safety and even vet care are a shining example of the good that is out there.

I’m refreshed and inspired by the simple acts of kindness between these people and the animals they protect…and while I am trying vehemently to convince my husband we should adopt one (it could just ride in my purse on the plane home I'm explaining...), I’m quite certain he isn't going to give in. So, a donation to help the shelter in some very small way will have to suffice for today. 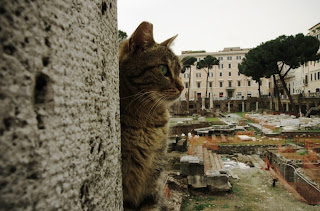 (Wasn't able to get a great capture so photograph credit here belongs to TheHistoryBlog.com Thanks!)
Posted by The Newlyweds at 3:24 PM