Our very last stop in Rome is to a location that's a bit grim - no warm and fuzzies like the story of the loving Roman Cat Ladies. This tale initially comes off a bit morbid, but don't judge this crypt by its decor too quickly!

Though a lesser known attraction, the Capuchin Crypt is a highlight of Rome and an absolute must-see. At a minimum, I can promise this site is unlike anything you've ever seen before.

Descending into the crypt, we find ourselves in the midst of an eerie art piece. The strangeness of this place is first frightening and then wildly fascinating. There is opulence in the decay, extravagance in the darkness. The chandeliers are artfully composed of human vertebrae, and the wallpaper of skulls.

This crypt is the final resting place to the remains of 4,000 Capuchin Monks. The brothers of this order who died between 1528 and 1870 are all laid to rest as pieces of this riveting work. While it appears to be one of ghastly macabre - this sect of Catholic Monks claims it is anything but. This work is intended not to revere death, not to idolize the darkness but to embrace it in a manner which speaks to those still earthbound. This crypt has been created over hundreds of years to be a reminder of life's impermanence.

Pelvises are arranged into flower-like sculptures, leg bones pinned to wall creating frames, and full skeletons clad in the hooded robes of the Capuchins find eternal slumber in small niches about the crypt. Everything in sight is shriveled and bizarre, but somehow the collection, and care with which it is arranged, makes an incredibly stunning and stirring work of art. It is rumored that an artist (and subsequent madman in the opinion of many), who took refuge in the basement of the church for some time, began this project and that the tradition was then continued by the Order as brothers died over the subsequent 200 years.

As we exit the crypt, a small plaque reads:

"What you are, we once were. What we are, you someday will be". 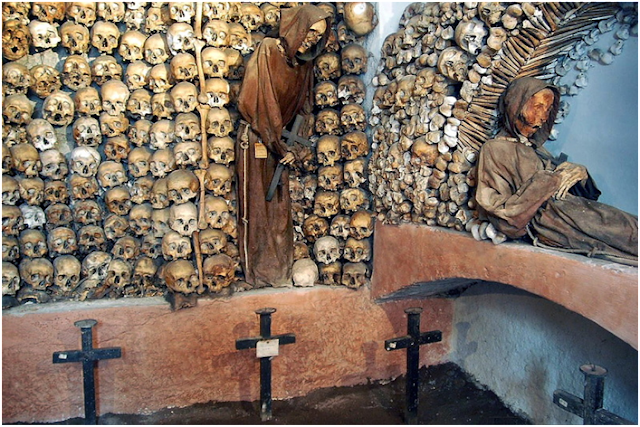 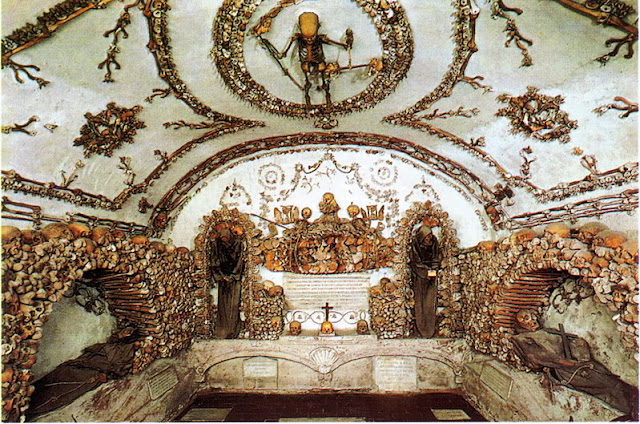 Posted by The Newlyweds at 4:22 PM